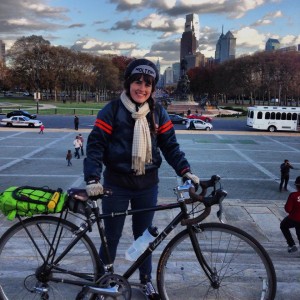 Where are you from? Outside of Chicago originally, but have lived in NYC for 7 years.

Where do you ride? My daily commute from Bushwick to Midtown West along the West Side Greenway, as well as various long-distance hauls on the weekend. Most recently I went on solo expeditions from NYC to Philadelphia, and later, NYC to Atlantic. Basically I’ll bike wherever there are roads (and sometimes, when Google Maps messes up, where there are not).

When and why did you start riding? I’ve been riding since I could fit into a bike seat thanks to my parents. When I moved to NYC I took a little hiatus from biking, save for a summer in college when the L train was literally never running. What really got me back on the bike, though, was the subways shutting down for Hurricane Sandy. I decided to take my red, gathering-rust Ross Compact over the bridge to work. Doing so reminded me of what I had loved so much about biking in the city: it frees you from the constraints of public transit while making the city seem so much more compact & accessible.

How has WE Bike NYC impacted your life? Cycling in New York can definitely be a boy’s club — riding through my first winter in 2013, my main cycling contacts were the guys at the bike shop, and while they were super helpful, it did feel like I was the only woman on the road. There were things I wanted to ask that I wasn’t always comfortable asking men about (SADDLE SORES, AMIRITE, LADIES) Similarly, many of my gal friends would go on rides with me, but weren’t as interested in the geeky “OMG salivating over that Colnago crankset” aspect of biking, or had bikes that couldn’t sustain the distances I wanted to go. WE Bike NYC put me in touch with a community of like-minded ladies who are just as into bikes as I am, both from a technical and on-the-road standpoint. (And also give GREAT advice on saddle sore treatment, NAMEAN?)

Why do you want to go on the ride? Long rides are my jam! After riding the NYC Century Bike Tour in September 2013, I knew I needed to get out on the road for longer distances — I’m addicted to the feeling you get fifty miles in where all your inner anxieties are wiped away, and all you can focus on is your body moving forward. It’s a strange but amazing kind of physical meditation. Unfortunately, I’ve had to pursue many of these rides alone; not for lack of willing companions (like I said, WE Bike NYC ladies ain’t afraid of no mileage), but because of conflicting schedules. This is a chance to get on the road with my friends and eat up those miles! Of course, I’m in this for more than selfish reasons, too. Not only is this an opportunity to get out of the road with some of my best cycling gal pals, it’s an opportunity to show the cycling community that women’s cycling groups exist, an opportunity to show women that they don’t need to go into cycling expecting to be the “Smurfette” (i.e., only woman in the wolfpack), and in turn, hopefully motivate other women to get out on their bikes more often and for more miles!

Push Mary forward in keeping us on keeping on this ride: Click here!