Now that you have gotten to know who we are, learn more about us and our process. WE will be rolling out a series of guest posts from our riders and sponsors.

Kristina Sepúlveda shares some memories of her biking beginnings… 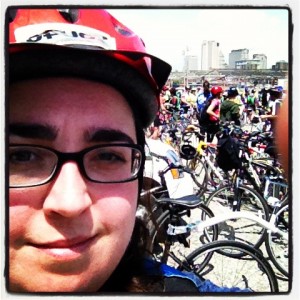 This is me at 31, not 10. Hard to tell though because my face has not changed.

I learned how to ride a bike when my family moved from New York City to Sarasota, Florida when I was 10 years old. I picked out a pink and aqua girl’s frame and wobbled around the block for a few weeks before I met my first neighborhood friend. She rode a dark red adult road bike with drop handles. She was a year older and almost a foot taller. Sometimes, I would try her bike on and stretch my legs as far as they could go to reach the ground to brake safely.

I rode my bike to school throughout the fifth grade, only a few blocks away, but a daily rush of freedom and responsibility. I went to a school too far away to ride for middle school and was teased relentless on the bus as I made my way through adolescents and the emotional eating that comes with. After school hours, to try to repair my battered self esteem, I rode around the neighborhood with guy friends, getting into petty criminal and emotional mischief. The bad kids tend to not be picked on.

On a particular bad behavior escalation day, I chained my bike to a low post in front of the pool hall, the height of my waist low. It was stolen within the hour. My parents, while disappointed, were not surprised that I was losing my attention to detail as I grew up. Nor were they surprised when it showed up badly beaten and not locked to the bike rack in front of the mall, I stole it back and left it to continue its journey into rust and disrepair in the garage.

I have no idea at what point my parents tossed it.