WE Bike NYC is organizing ten women from five organizations to ride 262 miles on bicycles from New York City to Washington, DC to represent their communities at the nation’s largest annual bicycle advocacy event, the National Bike Summit on March 3, 2014. WE are so pleased to be supported by WomanTours, Bicycle Times Magazine, Pearl Izumi, Velojoy, and InTandem, and Transportation Alternatives. For more about the ride, check out our fundraising page HERE!

Now that you have gotten to know who we are, learn more about us and our process. WE will be rolling out a series of guest posts from our riders and sponsors.

On this post, Casey shares a humorous tale of what happens when you combine the joys of adolescence and long distance bicycle touring… 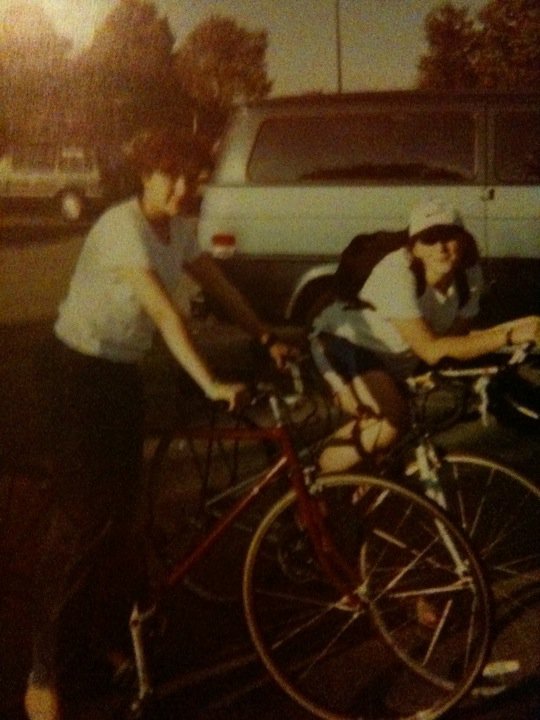 The first time I ever rode my bike a really serious distance was when I went on my first tour at 14. As an awkward adolescent middle schooler, I went with a friend (Anna) and her family to Canada for a large supported tour. While I hadn’t done anything like it before, Anna’s family had taken bike trips as their vacations for as long as she could remember, so they were all old pros. But I was young and in pretty good shape from playing sports in school, so with little (no) training, off I went. The tour looped around the peninsula near Niagara Falls, averaging anywhere from 55-70 miles a day. We slept in tents in fields of local high schools, would break camp and stow our gear in a giant semi truck, and ride from early in the morning til mid-afternoon.

I managed to get through the first half of the tour with only minor incidents: one spill on the rail trail gave me some gnarly road rash that was remedied by sticking a maxi-pad to the inside of my shorts to cover the wound until it could be dressed properly. (There was pretty much nothing I could think of that would have been more embarrassing than that at the tender age of 14.) And, while messing around with friends trying to ride with no hands, I rode off the road, between a telephone pole and a tree, only to flop over into a bush full of burrs that I would be picking out of my hair for the rest of the tour.

Our rest day was in Niagara Falls, with wax museums, haunted houses, and tourist attractions galore, and with 3 days left in the tour to go, I was feeling pretty good about things. We awoke the next morning ready to ride, and were about 5 miles in when the weather started getting gross. What started as drizzling and breezy turned into downpour and a fierce headwind that lasted throughout the day. This is when I would hit the wall.

I have a distinct memory of climbing a hill, my shoes soaked, barely able to see from the rain blowing in my face, my muscles aching, and feeling like I was spinning and spinning the pedals and barely moving at all. I finally came to the crest of the hill and started down, which should have been pleasant but wasn’t, due to the headwind and the rain. I coasted into the last rest stop of the day at the bottom of the hill, found a patch of grass, dismounted, dropped the bike on the ground (Anna’s mom to this day says that I threw it, but that seems dramatic), and said I was done.

To their credit, Anna’s parents handled it really well. They reassured me that I had been doing a good job, even though I was kind of being a baby at that moment. They said that it was totally up to me if I wanted to take the SAG wagon the rest of the way, and that no one would think I was lame if I did that. And they told me how much farther it was, and how long they thought it would take to get there if we rode. They got me to eat a snack and have some water. And by the time they were ready to go the last leg, I was too.

Everyone hits walls. And sometimes, it does mean that you take the SAG wagon the rest of the way, which is ok. But sometimes, you need a pep talk, a snack, and some water to get you going again.