Part of why I love biking is that it exposes me to new people, places, and things ALL THE TIME. With Women Bike PHL, one of the goals is helping more women to try new things via bicycles — together! Here are two of my favorite “trying new things” stories from the last year of Women Bike PHL:

1) The Mullica Hill Women’s Triathlon Club is an inspiration to start out with — what started as four women in 2009 has grown into a positive, supportive club for 700+ women from the New Jersey and Philadelphia region working toward their personal fitness goals. One experience that not a lot of MHWTC ladies have had, however, is riding a bicycle in the city. Women Bike PHL offered a few urban rides for ladies from Mullica Hill last year. One of them looped around Philly’s gorgeous riverside paths on either side of the Schuylkill River, and wound its way through West Fairmount Park. Most of the women had never seen this part of Philadelphia before — I was especially excited to share the gorgeous, tucked-away ‘Pavilion in the Trees,’ a treehouse-inspired sculpture by Martin Puryear in West Fairmount Park. It’s not something one would be likely to run across without a bicycle and a sense of adventure. It was so gratifying to be able to show these women who were totally badass cyclists (they can go a heck of a lot faster than I can, that’s for sure) to a different type of ride, and a new perspective on Philadelphia. 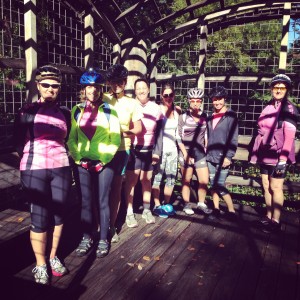 2) In early December, Philadelphia hosted the Single Speed Cyclocross World Championships, a crazy party of a bike race where the competition is real — but so is the silliness. Women Bike PHL led a ride starting from a centrally-located bike shop and heading up to the race (to spectate, not participate). Personally, I’d never seen Cyclocross before. When we pulled up to Belmont Plateau, where the course began, I couldn’t believe my eyes — there were hundreds and hundreds of people on bikes all over the Plateau, and they were all wearing RIDICULOUS costumes – everything from a lobster, to Dick Cheney, to a gorilla, to ET. As the men’s race began, snow began to fall lightly, and then harder. Some of the more scantily-clad riders seemed in danger of frostbite, but I think they had a lot of beer in their bellies to keep them warm…It was definitely one of the more surreal events I’ve ever attended. A cohort of riders (including myself) ended up having to head back a bit early to avoid getting stuck in the snow — even so, making it home in the snowstorm was some of the most treacherous (and fun) riding I’ve ever done. I don’t think I would have attended this event without the support of a group of women bicyclists going with me. And I’m so glad I did! 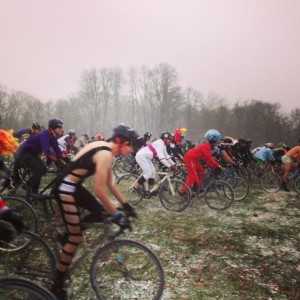 It was exciting to realize that the community that Women Bike PHL is creating can give back to all different kinds of cyclists. Triathletes get to explore explore Philly’s hidden gems, commuters like me can check out crazy Cyclocross races. There doesn’t seem to be a limit on the new experiences that bicycles can connect people to. The ride to DC will be one more such “new experience” — and I can’t wait.